The increasing popularity of German Shepherd Dogs throughout the world has exposed the breed to different types of breeding programs, breeding experimentation, and styles, which consequently led to several bloodlines and types in different countries and for different reasons. Apart from this, there are a number of offshoots of the breed, all of which claim their respective breed standard. Crossing between the lines and types have produced different odd colors and style that resemble what we call German Shepherd Dogs. As a matter of fact, when it comes to true type GSD, there are no rare colorations and special styles with desirable features. Except for the really rare ones like the Brindle gene, which had been a pure gene, there’s no desirable color and types that can be concluded as special. 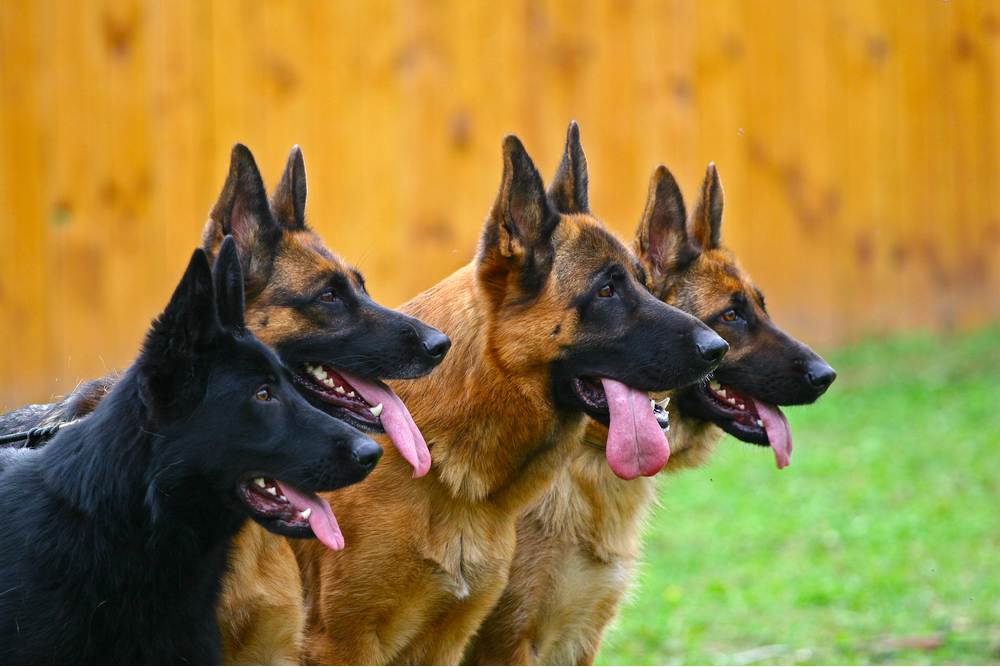 German Shepherd enthusiasts and responsible GSD learners know that breeders who are engaged in promoting any special types or color of GSD are not breeding these animals keeping the GSD standard in the mind. For instance, Large, Big Boned, or Oversized German Shepherd Breeders who are throwing out ads to promote their types are learned, breeders. Like any other recognized dog breed in the world, German Shepherds have a specific breed standard, and breeding is to be done with the standard in the forefront of the mind.

This picture exemplifies the old-style GSD that was entirely different in look from the German Shepherds of contemporary types and lines. The sleek structure not very angulated joints and sporty look were desired by the breed founder Captain Stephanitz who had framed in his mind a breed that would have the extraordinary working ability, being supported with a lower stationed structure that would be perfect for long-term, consistent trotting. The plan was not to make a heavyweight massive structure that could challenge the breed’s working ability and speed. Such sleek and strong GSD specimens had been the main foundation of the breed. Later the breeder, with the help of planned and selective breeding developed the breed to a great extent. Check out the German Shepherd development process.

Working Line German Shepherds The German Shepherd Dog had been primarily engineered to work with humans. It is basically a working breed. The breeding experimentation has given birth to several other types and lines. Working lines GSD has the ability to excel in any kind of task under stressful situations. The working line German Shepherds do not head the turning beauty as their show line counterparts. For working line GSD – “Utility is the true criterion of beauty”. It’s his working ability where actually the beauty of this GSD type lies.

DDR Line German Shepherds is a distinctive GSD type that needs to be popularized far and wide. The DDR line GSD is the East German bloodline that have been developed in the German Democratic Republic (Deutsche Demokratishe Republik) – East Germany, from the dogs that stayed back there after World War II. The DDR Line German Shepherds have been named so after the DDR, which was a socialist state founded in the year 1949 in the Soviet region of occupied Germany and in the portion of East Berlin that had been occupied by the Allied forces. This type has a strong, lean, muscular body, good bone constitution, large massive head, comparatively dark pigmentation, and less angulated than the West German show Lines.

The Czech German Shepherd Dog or Czechoslovakian GSD is again another distinctive type of German Shepherd that was developed from the DDR lines and had been bred in communist Czechoslovakia as the state-working GSD. Prior to the revolution in Czechoslovakia and the fall of the communist government in the year 1989, Czech German Shepherds used to be bred as working dogs for the protection of their borders. The most interesting fact about this type of German Shepherd Dogs is that the Czech GSD line used to be bred only in one kennel founded in 1955 that was founded and owned by the Czechoslovakian Army’s Border Patrol. The dogs used for breeding were mainly picked from the DDR lines. The breeding program strictly encompassed the development of the working GSD that had strong nerves, magnificent working ability, heavy bones, and dark pigmentation.

In Britain GSD is called Alsation or Alsatian after the name of the place of its development –  the border area of “ALSACE – LORRAINE”. Check out the naming history of Alsatian Dog. This is a different type in terms of structure – different from the most popular West German high-line GSD. This line of German Shepherds has been developed from the old German bloodlines imported to the British Isles after the war.

By the phrase “Old American Show line German Shepherds”, we mean to say the American show dogs that were bred before the 1970s. Old American show was typically slightly different from the contemporary American Show German Shepherds. The angulations were not as extreme as we find in the modern American GSD. This old type of American GSD has gone to the verge of extinction with the gradual advent of the contemporary angulated type.